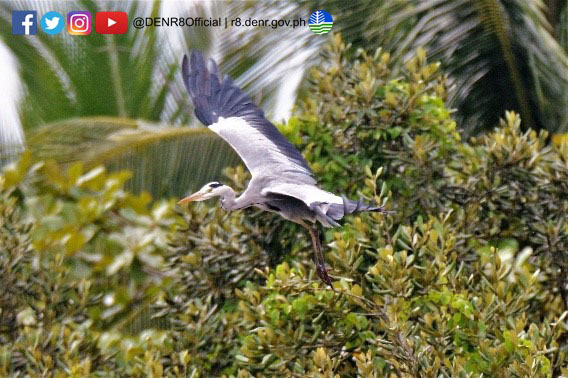 “Local government units are highly encouraged to formally declare as migratory bird sites those areas where the presence of these fowls are regularly monitored. The passage of a municipal resolution declaring these as migratory bird sites will empower local government units to have a direct management of its protection and conservation,” says Development Manager Officer Ingelina Lantajo of the Department of Environment and Natural Resources in Region VIII.

The DENR sounds off this call for LGUs to take active participation and conservation of migratory bird sites as it joins in the Asian Waterbird Census for the year.

The Asian Waterbird Census (AWC) is part of the International Waterbird Census. It runs parallel to other international waterbird counts in Africa, Europe, and Neotropics which takes place in January each year. This is in support to the conservation and management effort of wetlands and waterbirds worldwide. Since the inception of the AWC way back in 1987 in the Indian subcontinent, it has grown rapidly to 26 countries in South Asia, East Asia, South East Asia, Pacific, and that of Russia Far East.

The Department of Environment and Natural Resources has joined the AWC in the 1990s through its regional offices. In Region 8, DENR has identified seven (7) bird sites in the provinces of Leyte, Southern Leyte, Samar, and Eastern Samar where the presence of diverse and numerous species of migratory birds was documented.

For this year, all sites were visited except for Guiuan Intertidal Flats in Eastern Samar due to LGU restrictions following an upsurge of COVID-19 infections. For the province of Leyte, the waterbird census was conducted at the Ormoc Bay Wetlands, Ormoc City; Lake Bito Inland Wetland in the municipality of MacArthur; Carigara Bay Wetlands in Carigara and Barugo and the Tres Marias Islands in Palompon.. The Southern Leyte Bird Sanctuary in St. Bernard, Southern Leyte which covers the barangays of San Isidro, Panian, and Himbangan was also visited for the waterbird count. In Samar, the waterbird count was done at the Maqueda Bay Wetlands within the towns of Motiong, Jiabong, and Paranas.

“Just like last year, there was a noted decrease in the number of migratory birds counted although the same types of species were identified. Since there was no apparent denudation of mangroves forest and degradation of their wetland habitat, we can surmise that the typhoons of last year may have forced the migratory birds to shift to other sites for their food and roosting place,” says Ms. Lantajo who also serves as the DENR focal person for the conduct of the waterbird count.

The annual Asian waterbird census is conducted mainly to monitor the population, as well as the changes in waterbird numbers and distribution by regular and standardized counts of representative wetlands. Likewise, it is an activity geared towards increasing the awareness of the communities on the importance of wetlands considered as the kidneys of the earth and as the natural habitats of these fowls.

“While there was a decrease of the monitored number of migratory birds for this year probably because of weather disturbances, the fact alone that these can be found in our wetlands is an indication that we still have an ecologically healthy wetland ecosystem. These migratory birds remain as our environmental indicators of our wetlands ecosystem. Ensuring the integrity and protection of these wetlands ecosystem should be seriously considered by the LGUs,” says DENR OIC-Regional Executive Director Tirso P. Parian, Jr. 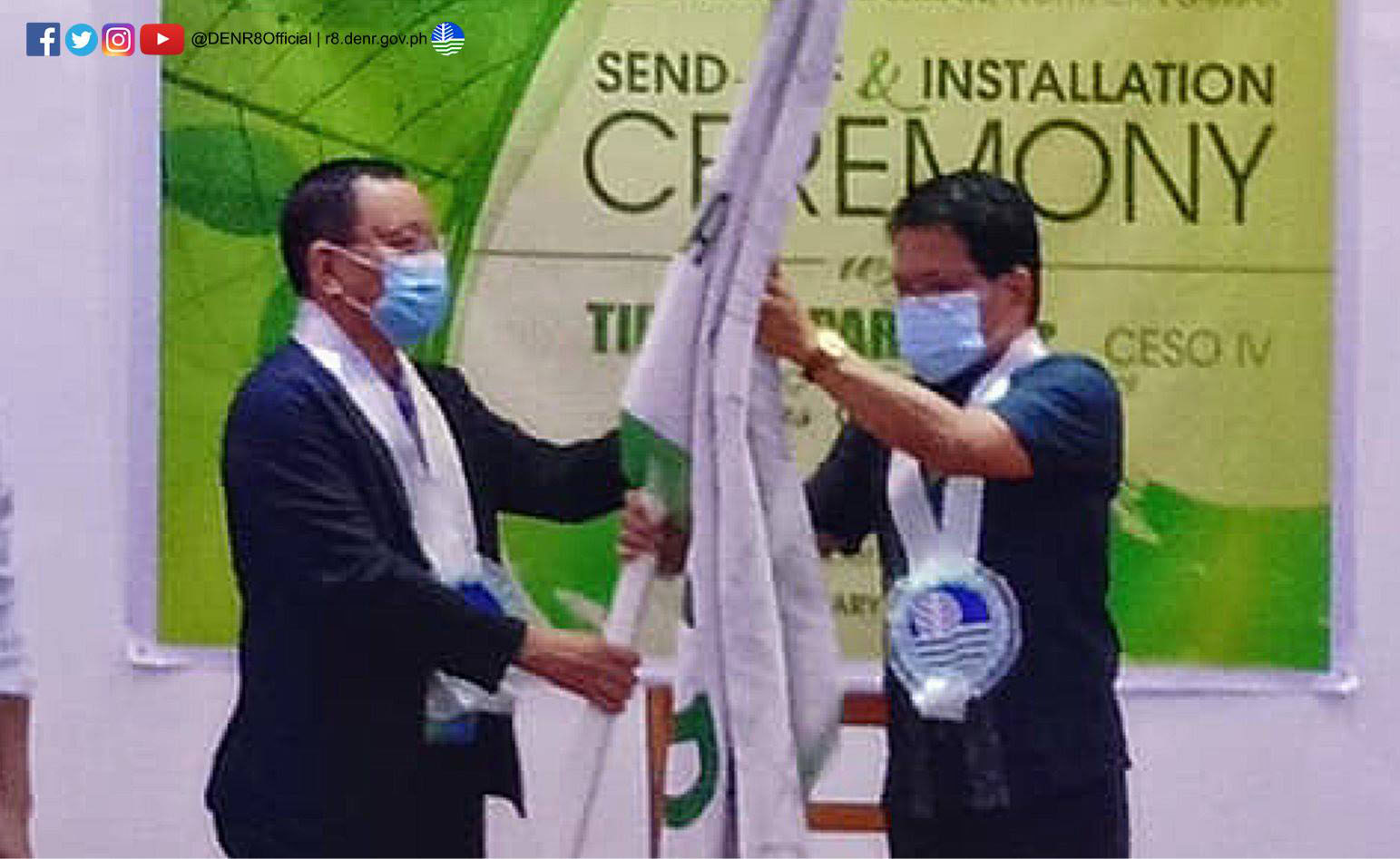 Eco, a forester by profession will be taking the helm in Northern Samar as his highest position, yet, in the DENR.

"I am excited for yet another accomplishment that Forester Eco will do for the DENR here in Northern Samar through his expertise and experience in the Department. May you continue to keep up the good work”, says Director Parian.Eco, a forester by profession will be taking the helm in Northern Samar as his highest position, yet, in the DENR.

He also reminded Eco to always give importance to all of his personnel who serve as front liners in the delivery of services. “Being in a higher position means bigger responsibilities you must undertake. We should always prioritize our people in the office to be able to deliver our services well to the public.”

Eco served as the Community Environment and Natural Resources Officer in Catbalogan City from 2019-2020 prior to his reassignment as the OIC PENRO of Northern Samar. Former PENR Officer of Northern Samar Angelito B. Villanueva is now transferred to PENRO Samar. There are 24 municipalities under the jurisdiction of PENRO Northern Samar, consisting of 45,843.07 hectares and 32,452.20 hectares of forest and coastal area. 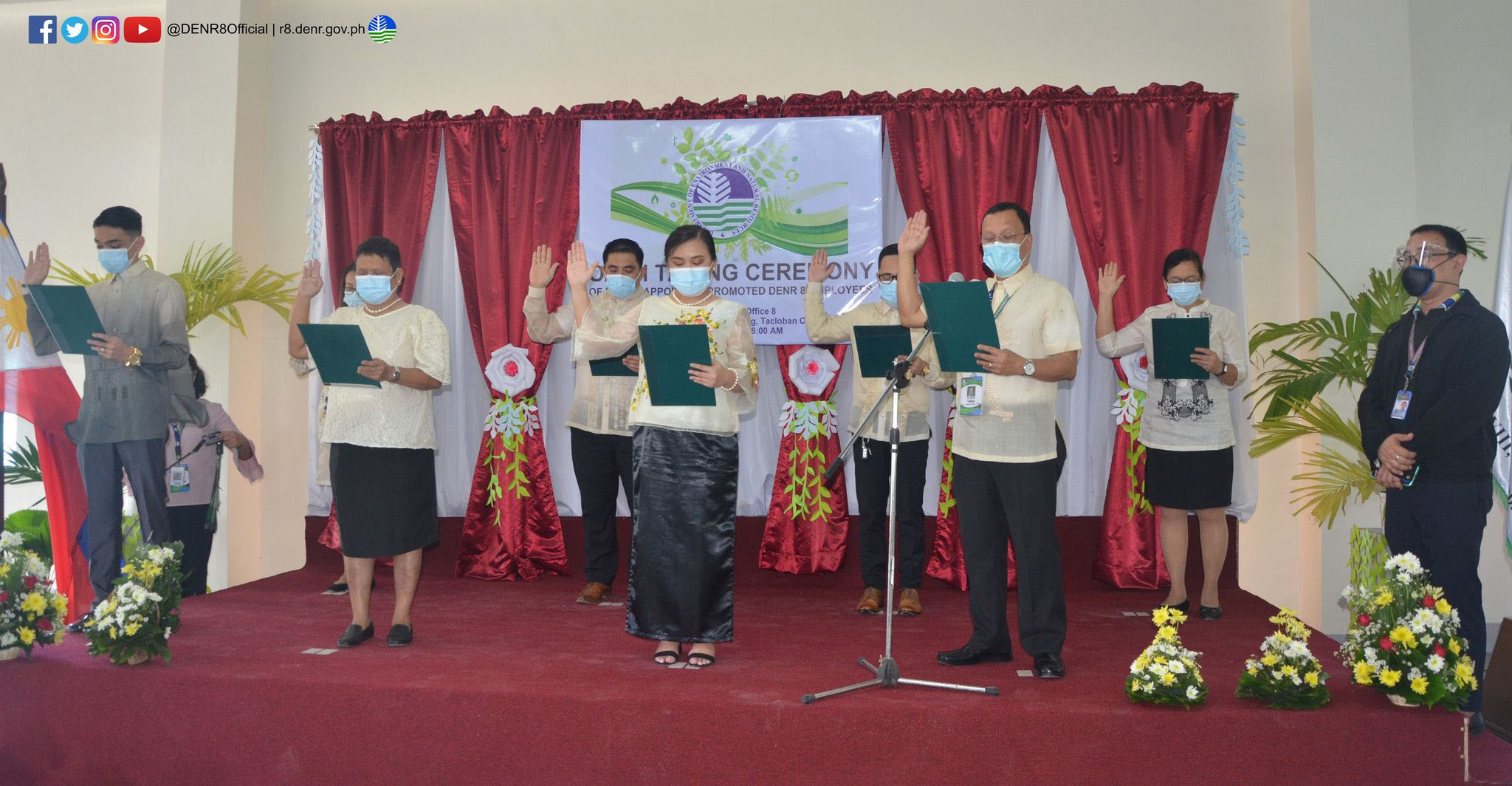 Some fifty one (51) newly appointed and promoted employees of the Department of Environment and Natural Resources (DENR) Eastern Visayas recently took their oath of office and commitment to public service.

Based on their competencies, fourteen (14) were given original appointments, thirty five (35) were promoted, and two (2) were appointed for lateral transfer.

In welcoming them, Regional Executive Director Tirso P. Parian, Jr. emphasized that in public service, people outside the organization are very important. He added that a DENR employee should always uphold teamwork and its core values of discipline, excellence, nobility, and responsibility.

Director Parian also laid his trust and confidence on the newly appointed and promoted personnel saying, “I’m sure that the competence we saw in their applications will manifest into quality performance”.

Meanwhile, DENR Assistant Regional Director for Management Services and Chairman of the Human Resource Merit Promotion and Selection Board (HRMPSB) Arturo N. Salazar challenged the newly appointed and promoted employees to take care of their positions and value the trust given them by the Department. He also encouraged them to continue nurturing their competencies and strive hard to provide the best service to DENR clients.

The placement of these employees filled-up residual positions deemed vacant due to retirement, promotion, and death of incumbent employees. 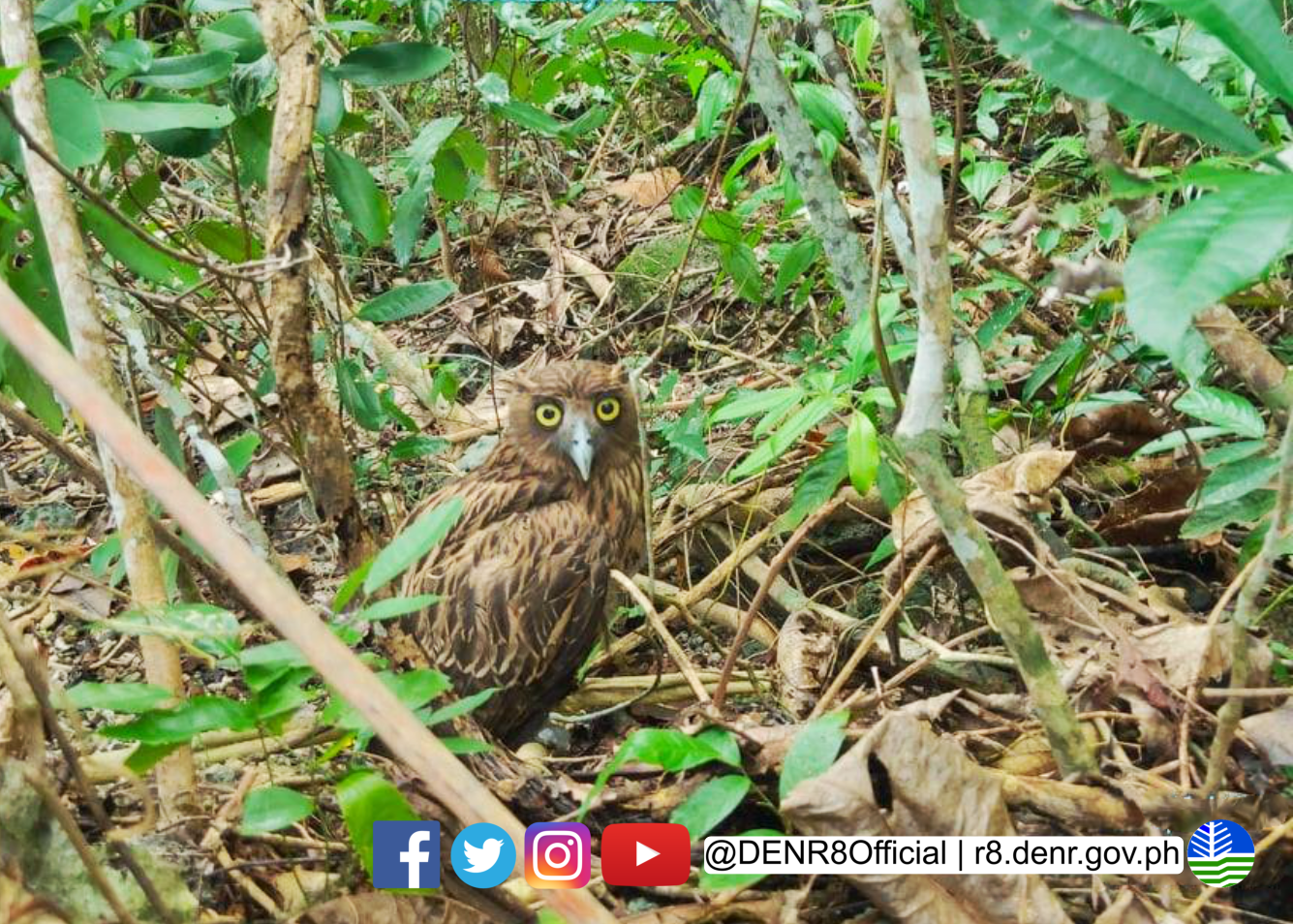 A juvenile Philippine eagle-owl (Bubo philippensis) was recently released back to the wild in a forest area in Sitio Sabang, Brgy. Caluwayan, Marabut, Samar.

The owl was turned-over to CENRO Sta.Rita by a group of concerned citizens. According to them, they were visiting the famous rock formations in Marabut, Samar last December when they saw the owl fall near them.

They captured it and fed it with chicken meat since strict quarantine protocols of Samar hindered them from immediately turning-over the owl to CENRO Sta.Rita.

After ensuring that the owl was fit for release, it was brought to a forested area in Marabut, Samar on January 14, 2021 by DENR-CENRO Sta. Rita field personnel.

DENR Regional Executive Director Tirso P. Parian, Jr. says “these wildlife species need to be left untouched in the wild since they help balance the ecosystem by controlling the number of insects and pests in the forests and most especially in agricultural areas. I’m glad to hear that the owl is back to its natural habitat.”

Philippine eagle-owl is one of the largest owls in the world. It is an endemic species in the Philippines commonly found in the forests of Luzon, Catanduanes, Samar, Leyte, Bohol, Mindanao and possibly Sibuyan. It is now considered to be an endangered species due to decline of lowland forest based on the IUCN Red List Category and Criteria 2016 and the Updated National List of Threatened Philippine Fauna and their Categories (Department Administrative Order No. 2019-09 dated July 12, 2019).

“The deputation of ENROs is consistent with the Department’s mission to directly involve the people in protecting and conserving the country’s environment and natural resources,” says DENR R8 Regional Executive Director (RED) Tirso P. Parian, Jr.

Director Parian issued deputation orders to nineteen (19) volunteers in Palo in August last year and ten (10) from Hilongos in December. Unless revoked by the issuing authority, these ENROs shall serve for one (1) year. They shall have the following functions: Assist in the issuance of apprehension receipts, seizure orders and notices of administrative hearings; arrest, even without warrant any person who committed or is about to commit an environmental law violation; deliver the offenders including the apprehended forest products, tools, equipment and conveyances within the period prescribed by law from the time of arrest and seizure and act as witness in court for the speedy prosecution of criminal complaints. They shall also assist in the conduct of ENR Information, Education and Communication (IEC) campaigns.

“These ENROs are equipped with technical knowledge and skills to perform their duties, having been provided with the necessary training and lectures on ENR laws and regulations, “says Regional Enforcement Chief Allen Cebuano.

“This program is part of our strengthened efforts to protect our environment and natural resources from violators who continue to disregard our environmental laws by ensuring their apprehension through our intensified linkage with the community as first responders in the enforcement of our laws,” added Forester Cebuano.

In 2020, the Regional Enforcement Team, headed by Cebuano in partnership with the law enforcement agencies such as the Philippine National Police, Philippine Coast Guard, Armed Forces of the Philippines and Task Force on Anti-Illegal Logging, were able to apprehend around 222,865.32 bd.ft. of undocumented forest and non-timber forest products including vehicles and conveyances with an estimated value of Php1,143,266. This feat was a product of 12 operations conducted by the joint enforcement team in Samar and Leyte.