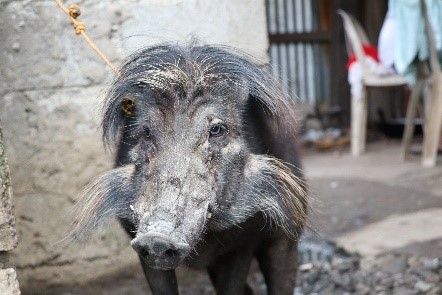 “The continued presence of warty pigs, and other wildlife in their natural habitat is an important component for a balanced ecosystem. The citizenry must be mobilized for their protection and the conservation of the forests where they dwell,” says Forester Glen Garciano, OIC-Chief, Enforcement Division of the Department of Environment and Natural Resources in Region 8.

Such was the message conveyed by Forester Garciano to the residents of a far-flung barangay of a municipality in Eastern Samar where a captive Visayan Warty Pig was rescued and eventually released back to the wild. The release was through the cooperation and assistance of the barangay officials and some elements of the Philippine Army that were assigned in the area.

Based on DENR Administrative Order 2019-09 that updated the list of threatened Philippine fauna and their categories, the Visayan Warty Pig (Sus cebifrons) is categorized as critically endangered and is endemic to certain Visayan Islands. As a critically endangered species, it means that it is facing an extremely high risk of extinction in the wild in the immediate future.

“The protection and conservation of our flora and fauna species in the wild are of that magnitude in terms of importance a law has been passed providing its corresponding imprisonment and fine for those that will be proven to have committed the prohibited acts,” added Forester Garciano.

Under R.A. 9147 or the “Wildlife Resources Conservation and Protection Act”, it is unlawful for any person to willfully and knowingly exploit wildlife resources and it includes killing and destroying wildlife species; injuring and maltreating; collecting, hunting, or possessing wildlife; and trading them, among other prohibited acts. And depending on the category of wildlife, imprisonment of five (5) days to as long as twelve (12) years and a fine of Php200.00 to as high as Php1,000,000.00.