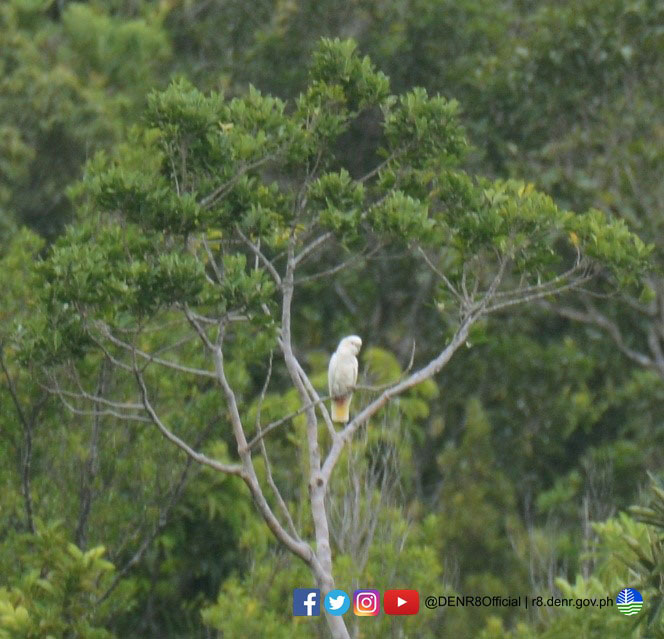 “The sighting of the critically endangered Philippine cockatoo in the Island of Homonhon underscores the need to protect its natural habitat from further destruction as its presence in the island is only the third confirmed location in the country aside from Palawan and Mindoro,” says Forester Virginio K. Cugtas, of the Conservation and Development Division (CDD) of the Department of Environment and Natural Resources (DENR) in Region 8.  He was the designated team leader of DENR personnel that monitored and verified the presence of the Philippine Cockatoo in the island.

The International Union for Conservation of Nature (IUCN) has classified the Philippine Cockatoo or the Red-vented cockatoo (Cacatua haematuropygia) as critically endangered because of its population decline between 60-80% from 1980 to the present as a result of destructive human activities. A recent estimate by the Katala Foundation, suggests that only 1,000 of them are left in the wild with 70-75% found in Rasa Island, Palawan. Its decline can be attributed to poaching because of its high demand among collectors and the destruction of their habitats which are the mangrove and forest trees as well as the conversion of lowland forests to agriculture, mining, and human settlement. The Foundation is an organization that successfully implemented the Philippine Cockatoo Conservation Program (PCCP) with the Department of Environment and Natural Resources – Biodiversity Management Bureau (DENR-BMB).

Local officials and residents have been pushing for the conservation and protection of the Philippine cockatoo and its natural habitat. With the support of the Philippine Misereor Partnership Incorporated (PMPI), the DENR has been collaborating with the LGU of Guiuan in Eastern Samar and the BLGU of Inapulangan of Homonhon Island for the area to be declared as a critical habitat based on DENR Memorandum Circular 2007-02 which provides the guidelines on the establishment and management of critical habitat enumerated in DENR Memorandum Circular No. 2007-02.