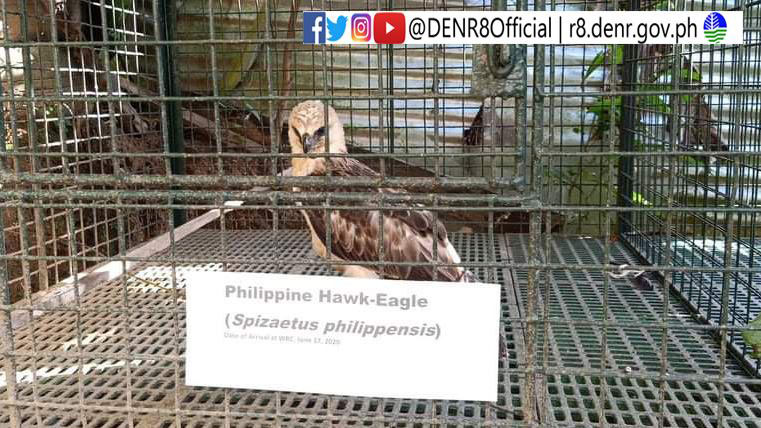 DENR CENRO Sta. Rita takes custody of an endangered juvenile Philippine Hawk-eagle (Spizaetus philippensis) locally known as “banog”, which was reported for rescue by a concerned citizen in Marabut, Samar.

Per account of the concerned citizen, the hawk-eagle was held captive inside a compound in Brgy. Veloso, Marabut, Samar by a certain Joshua Padullon, who claimed to have taken care of the hawk-eagle as pet for ten (10) months already.

This incident was reported to the Marabut Philippine National Police who immediately conducted an inspection to check on the veracity of the report. Coordination was then made with DENR Community Environment and Natural Resources Office (CENRO) Sta. Rita for the immediate rescue of the hawk-eagle.

Presently, the hawk-eagle is kept at CENRO Sta. Rita’s rescue center for further examination and rehabilitation before it is released back to its natural habitat.

DENR Regional Executive Director Tirso P. Parian, Jr. warned the public against keeping wild animals as pets. “Wild animals, especially those threatened and endangered are protected by laws of the government. Keeping them as household pets is punishable, and may bring you to jail”, RED Parian stressed.

The Philippine hawk-eagle locally known as “banog” or “lawin” is a bird of prey that is endemic to the Philippines. It is classified as endangered under the IUCN Red List Category and Criteria 2016 and DAO 2019-09 on the Updated National List of Threatened Philippine Fauna and their Categories. Mere possession of this species is punishable under the Republic Act 9147 or the Wildlife Conservation Act.