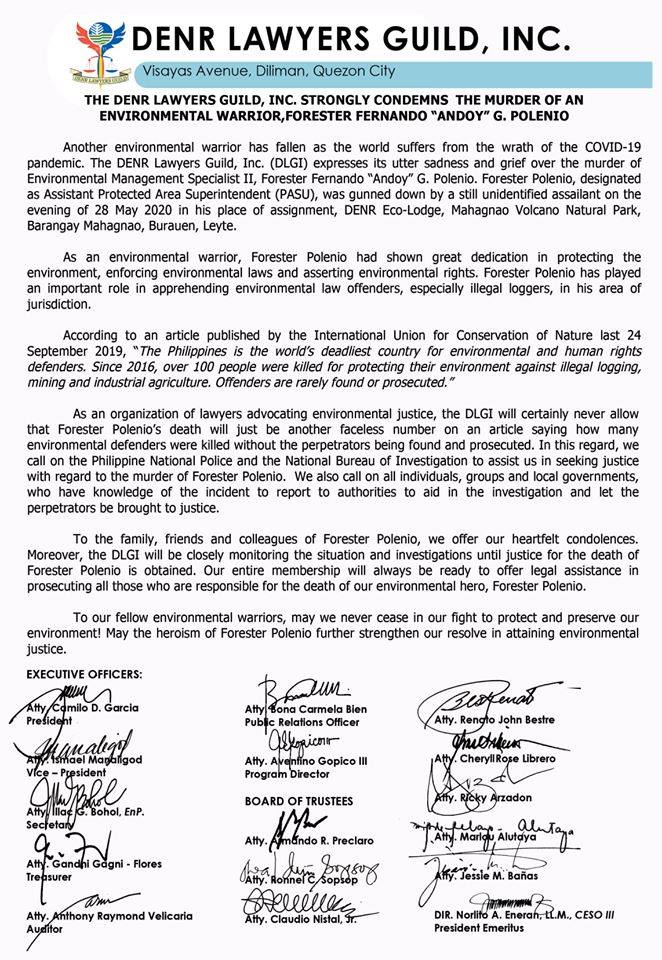 The Department of Environment and Natural Resources Lawyers Guild, Inc. (DLGI) strongly condemns the killing of DENR Region VIII employee Fernando “Andoy” G. Polenio, adding that they vow to closely monitor the case until justice for his untimely death is served.

Forester Polenio, an Environmental Management Specialist II of CENRO Palo and designated as Assistant Protected Area Superintendent (PASu) was gunned down by an unidentified assailant on May 28, 2020  in his place of assignment, DENR Eco-lodge, Mahagnao Volcano Natural Park, Barangay Mahagnao, Burauen, Leyte.

The DLGI stated that they will not allow the case of Forester Polenio, an environmental hero to be just part of the statistics showing a faceless number of unresolved cases involving environmental defenders. They call upon the National Bureau of Investigation (NBI), the Philippine National Police (PNP), all individuals, groups, and the local government units who have knowledge on the incident to report to authorities, in aid of investigation, that would bring the perpetrators to justice.

“His death, whatever the motive was, is highly reprehensible and deserves our condemnation”, Director Parian said.

Immediately after the incident, Director Parian ordered a team from the DENR to conduct a comprehensive investigation on the killing of Forester Polenio. He also requested the Department of Interior and Local Government (DILG) in the region to assist in ensuring a swift and credible conclusion of the investigation by the authorities.

Despite the COVID-19 pandemic, Director Parian assured everyone that the office is doing everything in its power to attain justice for the death of Forester Polenio.

“Let me assure you that the management is seriously looking into the incident and is committed in crafting mechanisms to ensure that all DENR employees can work in a safe and secured environment and that no similar incident will happen again,” Director Parian said.