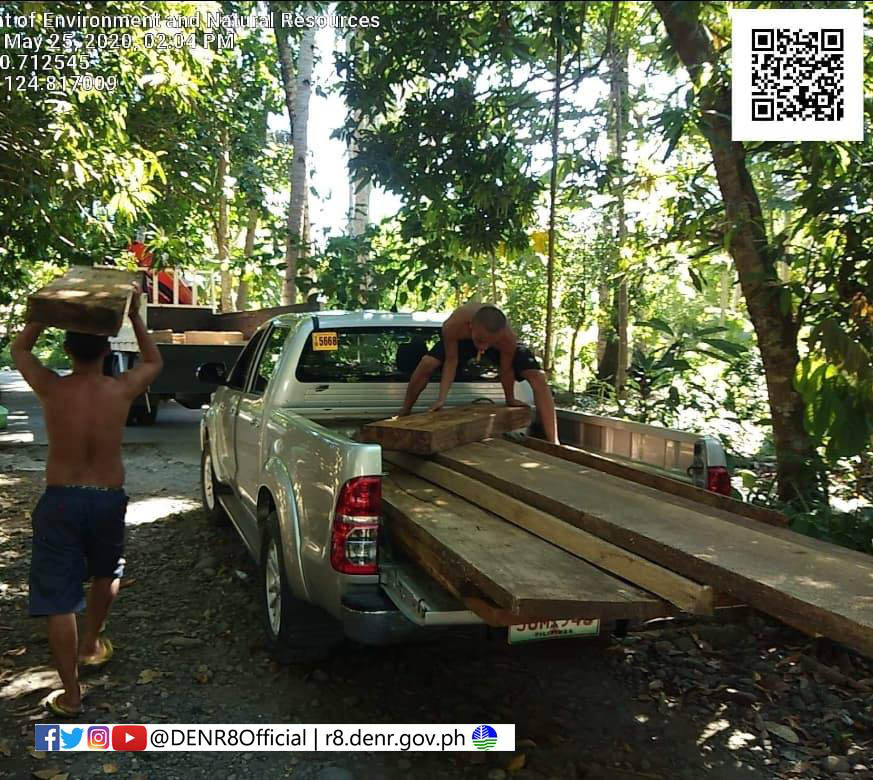 “Continued vigilance of the public and the judicious response of environmental law enforcers have led to another seizure of illegally cut lumbers and the apprehension of the timber poacher,” says Tirso P. Parian, Jr., Regional Executive Director of the Department of Environment and Natural Resources (DENR) in Region 8.

Acting on reliable information from a concerned citizen, personnel from the Community Environment and Natural Resources Office of Baybay City (CENRO-Baybay) together with the DENR Regional Enforcement Division, elements of the Philippine National Police (PNP) from the 1st Leyte Norte Provincial Mobile Force Command and from the Baybay City Police Station conducted a joint anti-illegal logging operation at Sitio Tinago, Brgy. Kansungka, Baybay City on May 25, 2020.

The said operation resulted to the apprehension of a certain Danilo G. Apas who was caught in the act of arranging and piling several lumbers beside his house which were later identified to be of antipolo (Artocarpus blancoi), narra (Pterocarpus indicus)and tugas or molave (Vitex parviflora) wood species.

The operation led to the seizure of 497 board feet of illegally cut lumber with a market value of Php24, 850.00.  CENRO-Baybay took custody of the seized lumber while the PNP arrested the suspect and was brought to the Baybay City Police Station. Criminal charges in violation of P.D. 705 or the “Revised Forestry Code” have been filed in court against Mr. Apas.

“It is a positive development that we are able to apprehend the suspect who was in violation of our environmental law. The full force of the law will be imposed on him to show the gravity of the offense against the environment and to be a precedent to others who may be entertaining of committing the same affront to environmental laws,” says RED Parian.

In previous anti-logging operations for this year alone of the Enforcement Division within the jurisdiction of Provincial Environment and Natural Resources Office-Leyte (PENRO-Leyte), a total of four (4) persons were also arrested for violation of P.D. 705 as amended. Of these, three (3) were arrested at Brgy Buntay Sea Side, Abuyog Leyte on March 11, 2020 for possession and control of Agar wood wedges, locally known as “lanete/lapnisan weighing more or less 1.8 kilograms with an estimated market value of Php40, 000.00. Another suspect was arrested for possession of 21 pieces of illegally cut narra lumber totalling 837.32 board feet with a market value of Php29, 306.20 at Brgy. San Pedro, Jaro, Leyte on May 01, 2020.

Charges have been filed and the suspects are now undergoing trial.