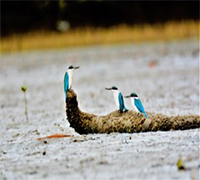 The Department of Environment and Natural Resources (DENR) continues to support the annual Asian Waterbird Census which seeks to monitor the distribution and population of waterbirds and status of wetlands. The presence of waterbirds is one of the key indicators which tells whether wetlands, such as mangrove areas, are still ecologically healthy.

In the recently concluded waterbird count in the region, there were fewer migratory bird species observed compared to the census of the previous years. “The recent typhoons, Tisoy and Ursula, which caused some damage to our mangrove areas may have displaced the migratory birds,“ says Ms. Ingelina Lantajo, Development Manager Officer II, who is the DENR focal person for the conduct of the waterbird count.

The census was conducted in seven (7) wetland sites region-wide to assess and compare the quantity of migratory birds and variety of species counted from the previous years. In Leyte province, the census was conducted in the Ormoc BayWetlands, Ormoc City; Lake Bito Inland Wetland in the municipality of MacArthur; Carigara Bay Wetlands in Carigara and Barugo and the Tres Marias Islands in Palompon. The waterbird count was also conducted at the Southern Leyte Bird Sanctuary in St. Bernard, Southern Leyte which covers the barangays of San Isidro, Panian and Himbangan. In Samar, the waterbird count was done at the Maqueda Bay Wetlands within the towns of Motiong, Jiabong and Paranas. In the province of Eastern Samar, the census was done at the Guiuan Intertidal flats.

Among the migratory birds identified during the waterbird count was a Northern Pintail duck at Lake Bito which was a new island record. Other species were Great Egret, Great Knot, Gray Heron, Common Sandpiper, Golden Plover and white-collated kingfisher, among others.

“The presence of these waterbirds is an indication that although some of our mangrove areas may have been damaged by recent natural calamities, there are still healthy wetlands for migratory birds seeking food and shelter away from the colder climate where they originally came from,” says DENR OIC-Regional Executive Director Tirso P. Parian, Jr.

Result of the waterbird census will be collated, analyzed and recommendations will be formulated. Like the previous data collected, it will serve as a contribution in the conservation activities locally and in other parts of the world. It includes species and site conservation, research programs and campaign plans to raise awareness of the importance of wetlands.

The Asian Waterbird Census is an annual event and runs parallel to other international censuses of waterbirds in Africa, Europe and Neotropics under the umbrella of the International Waterbird Census (IWC). The synchronized AWC 2020 was scheduled on January 4 – 19, 2020. Sites covered during the census include all types of natural and man-made wetlands, including rivers, lakes, reservoirs, ponds, freshwater swamps, mangroves, mudflats, coral reefs, rice fields and sewage farms and the like.