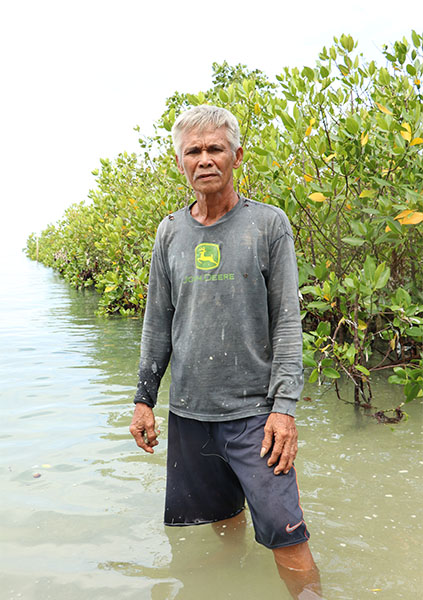 Super Typhoon Yolanda, one of the most powerful typhoons ever recorded made landfall in Eastern Visayas on the 8th of November 2013. The devastation on both lives and property was unimaginable and beyond description. Most of the survivors claim that their experience of the Super Typhoon will forever be carved in their hearts and memories throughout their lifetime.

However, just like any disaster, there are always stories, events, and happenings that provide a silver lining to an otherwise harrowing experience. We have the senior citizen couple from Brgy. Anibong, Tacloban City, who climbed a mangrove tree as the storm surge was rushing and rising to engulf them. They clung to dear life and survived to tell their tale.

Then the eyewitness account of personnel of the Provincial Environment and Natural Resources Leyte (PENRO-Leyte) who personally saw the rushing deadly storm surge caught-up in the mangrove forests along Red Beach, Palo, Leyte. This PENRO Leyte personnel witnessed how the lush mangrove forest reduced the surge’s destructive current as it reached the office.

These, and many other stories as to how mangrove forests saved lives and minimized the destruction of the storm surge to coastal communities in Eastern Visayas.

The havoc brought by ST Yolanda became the prelude that prompted an individual in Matalom, Leyte to start planting mangroves. This mangrove enthusiast is Mr. Gary Dabasol, 66 years old from Brgy. Punong, Matalom Leyte who established a mangrove plantation in front of his house located along the coastal area of their barangay. Fully aware that mangroves, act as defense against storm surge, Tatay Gary single-handedly planted around 10,000 mangroves since his experience of the dreaded Super Typhoon Yolanda.

From the mangrove propagules washed ashore during the aftermath of the typhoon, he started planting mangroves on his own. His skills and know-hows in planting this tree species came from his experience as a young boy. Gary shares that he was only eight (8) years old when he started planting mangroves in his hometown in Brgy. Jao, Bien Unido, Bohol. At an early age, he was already exposed to an environment filled with mangroves. He was a witness to benefits derived thereof by the people, coastal communities and the environment, as a whole.

Proudly, he shares that from 2013 to present, the mangroves he planted already reached around ten thousand (10,000). His only technique and proven method why his mangroves successfully flourish and survive over the years is constant nurturing. Gary aptly puts it, “taking care of my planted mangroves is like taking care of a dear child.” He clears the mangrove area of plastics and other wastes tangled to the roots to enable the trees to grow well. Also, to prevent organisms thriving in the area from ingesting or getting entangled to the plastics.

Gary is also aware that mangroves serve as shelter and breeding grounds for fish, crabs, prawns, and shorebirds, among others. He narrates that he is happy to see that these organisms thrive and find shelter in his plantations. “This scenario affirms the worth of planting mangroves, which I now consider my favorite hobby. With this, I am certain that the mangroves I plant not only help balance the ecosystem, but also provide a defense for the coastline, and most importantly, protect my home from floods, strong waves, and storm surge,” he said.

His mangroves have already protected his family and other nearby structures from several storms that hit his town since ST Yolanda. The recent strongest typhoon was Typhoon Rai (Odette) which affected Southern Leyte in December 2021. His mangroves conquered the waves and strong winds and kept the coastline, his house, and other nearby structures safe from being washed out by storm surge. His plantation withstood typhoons and are still standing and well-grown up to this day.

Tatay Gary shares that he wanted to extend his plantation beyond his location so that other nearby structures could also be protected from being washed out during bad weather. He is willing to do the initiative on his own. In fact, he volunteered to plant mangroves in an area a few meters away from his own.

His skill and passion for planting mangroves have already earned him local popularity since his good story has already made rounds on social media. It's proof that good deeds do not remain unnoticed and will rub itself on others. He recounts that there was a priest from his town who requested him to plant some forty five thousand (45,000) mangroves in his area. All the propagules were planted but sadly, they were washed out when a strong typhoon hit the area. It may be considered a big blow to his effort, but he is unperturbed and remains committed to planting more if the situation warrants.

Likewise, he was also tapped by the Red Cross in Tacloban City to share his technical know-how in planting mangroves. All these he did willingly so that more and more people could be aware of how important mangroves are.

“I am encouraging the youth of today to plant trees,” says Tatay Gary. “Since the youth of today will be the next generation of influencers, they should develop a love for planting trees of any kind, be that mangroves or other trees,” he added.

For Tatay Gary, his mangroves are his legacy to his hometown and the nation as a whole. He is more than willing to always share his experience in planting mangroves to safeguard communities.

Married but without a child, he considers his mangroves as his children. He takes care of them like they are gentle human creatures. His wife lends her support to his husband’s passion by helping him clean the mangrove area of plastics and other wastes. This she does regularly being a firsthand witness to the benefits that mangroves provide not only to their home but also to the nearby structures along the coastline.

“I do not have a wealth to pass on nor biological children to benefit from the mangroves I planted, that’s why this mangrove stands are my legacy to the community where I belong,” says Tatay Gary.

He hopes that his story will inspire many people, especially the youth to develop concern and love for the environment by doing selfless acts not merely for personal interests, but more importantly towards building resilience through environmental protection and conservation.