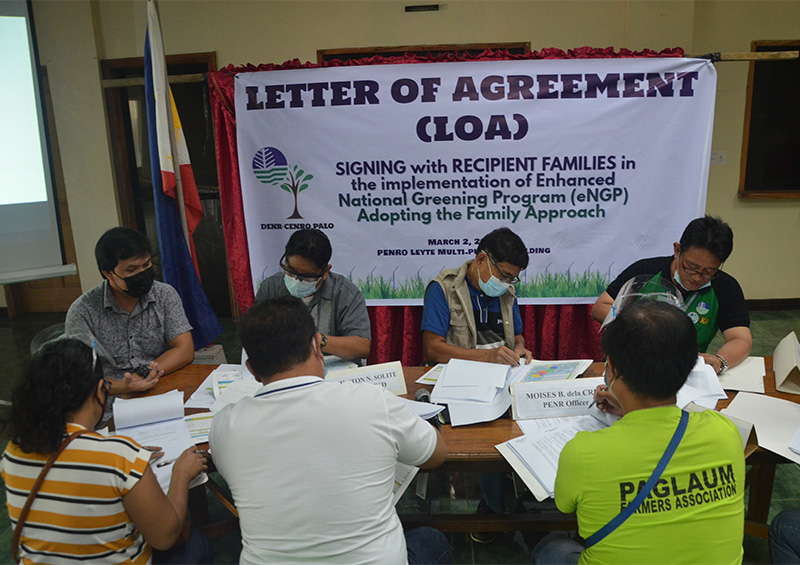 Decades ago, many of our citizens had this notion that the unbridled exploitation of our natural resources is their ticket out of poverty. It may be true to a few enterprising and cunning individuals. But to the majority, those were just fleeting moments of economic prosperity that were never meant to be sustainable. Eventually, they reverted to their impoverished condition and the road back to recovery was bleak since resources have become scarce and those that remain are now adequately protected. The wanton and irresponsible utilization of our natural resources, particularly our forests, has resulted in thousands of hectares of otherwise lush forests into denuded and degraded timberland as well as dried-up river beds.

It seems nature has had enough of our disrespectful attitude. It has in so many ways shown to us that Mother Nature is a force to reckon with, if abused. Things have to change.

And so in 2011, the government, through the Department of Environment and Natural Resources (DENR) rolled out one of its flagship programs to reclaim back our lost forest cover which is about 8 million hectares of denuded areas throughout the country through the National Greening Program (NGP). The target then was to plant 1.5 billion trees in some 1.5 million hectares nationwide from 2011 to 2016.

With its initial success and momentum gained, the government extended the program until 2028 through Executive Order No. 193 now known as the Enhanced National Greening Program (ENGP). It has the mandate to rehabilitate all the remaining unproductive, denuded, and degraded forestlands estimated to be still around 7.1 million hectares.

While the program is designed to be one of the greening strategies of the Department, it also serves as a poverty alleviation and food security program for poor families not only in the lowland and upland rural areas but included are the poor households in urban areas and coastal communities. It is also a means to harmonize and consolidate all efforts to rehabilitate our forest cover by the government in partnership with civil society groups and the private sector.

Implementing the NGP in Eastern Visayas from 2011 to 2016 alone, the area planted covered 118, 877 hectares which is more than the targeted area to be planted at 115, 298 hectares. This has even ballooned to almost 142,000 hectares area planted with 137,966.724 seedlings in 2018 that includes those already under the ENGP. The data projects a promising prospect in our effort to reclaim back our forests in the region. And from an economic standpoint, the program was able to provide much-needed livelihood with 454,666 jobs generated for the period 2011 to 2018 alone.

These figures speak volumes not only of the program’s efficacy of recovering degraded forests but also of providing a glimmer of hope to those wallowing in poverty. Government efforts in restoring our forests also remedies the pangs of hunger of poor households.

The program has even impacted the lives of many farmers adversely affected by the COVID-19 pandemic that further limited their options to make a living.

DENR Secretary Roy A. Cimatu has been consistent in pointing out the indispensable participation of all sectors in protecting our environment and conserving our natural resources by engaging people in the communities through people’s organizations. It is based on sound logic that people on the ground are knowledgeable of the situation and are in a better position to successfully implement the project.

With this, the Department developed strategies to empower the communities to be active collaborators for forest protection and conservation. From the partnership with people’s organizations, the Department through the ENGP has even made itself closer to the people themselves by engaging the basic unity of society – the families.

Recognizing the importance of families and the role they play in managing and rehabilitating forests, they now have been directly mobilized in developing plantations and reforestation activities by contracting them under the ENGP.

The implementation of the family-based approach came at an opportune time when people are cash-strapped because of the COVID-19 pandemic. In a way, the beneficiary families were provided with an economic stimulus package to keep them afloat as the pandemic rages and even beyond. “This new approach is helpful to my family because it directly compensates our labor and efforts and inspires us to be more committed to performing the job expected from us”, says Adelfa Balmes, a beneficiary from Brgy. Paglaum, Tacloban City. She is one of six (6) families in the said barangay that were contracted to plant an area covering thirty (30) hectares with a contract price of Php780,000.00.

At the regional level, funds earmarked in the implementation of the family-based approach are pegged at Php312,818,287.00 and will benefit more than 2,000 families. They in return will attempt to recover lost forest by planting suitable species to an area of around 14,833 hectares.

Preferential option for the most needy

For this year alone, Ms. Balmes is just one of the thousands of families throughout the region who qualified as family beneficiaries since they belong to the low-income class, lower-middle-income class, or middle-middle income class according to the data published by the National Development Authority (NEDA).

This is well within the intention of the program when it was conceptualized to be both a greening effort and as economic support to its beneficiaries. “The welfare of the people is given importance because the program is mainly a poverty alleviation and food security initiative of the government that espouses participatory strategy,” says Forester Joselito Eco, OIC-PENR Officer of PENRO-Northern Samar, addressing the family beneficiaries during the signing of the Letter of Agreement (LOA).

Mr. Domingo Algordo, a person with a disability (PWD) having lost an arm in an accident from Calbayog City,  was recently adjudged as a family beneficiary having the Best ENGP Nursery for CENRO Catbalogan. “Since childhood and coming from a poor family, life has been hard for me. It reached to a point that I care less where my fate leads me after repeated failures.,” says the teary-eyed Mr. Algordo as he shares his life story before he was introduced to the NGP. “Things took a turn for the better when I was recruited to be a member of a people’s organization who was awarded contracts by the DENR to produce seedlings and maintain a plantation site,” says Mr. Algordo.

The Calbayog Responsive Planters Association (CARPA) where Mr. Algordo is a member, has been a beneficiary of the NGP since 2016 up to the present. They now have around 150 hectares of the plantation they are managing mostly with fully-grown cacao trees, pili, and other fruit-bearing trees. For the family-based approach, Mr. Algordo and ten (10) other families have 50 hectares identified as their plantation site which will be planted with cacao through the assistance of their PO. “I have never considered my disability as a hindrance nor as an excuse not to work hard as anybody should. On the contrary, it emboldened me to work harder so that my fellow farmers will follow my lead and we be successful,” shares Mr. Algordo.

By all indications, Mr. Algordo who is now 67 years old, is succeeding. Their PO has now thousands of fully grown fruit-bearing trees, especially cacao. They are able to produce their own seedlings and have sold many of them to other farmers. “I now have the sustainable income that I never had before and I am now able to provide the basic needs for my family,” added Mr. Algordo.

Ms. Zosima Bantilan Padit, a 63 year old female farmer who is from Brgy. Old Manungca, Sta. Rita was also awarded as a family beneficiary with the Best ENGP Nursery by PENRO Samar. Like Mr. Algordo, she is a member of a people’s organization that was a recipient of the NGP since 2017. Their organization, the Bairan Farmers Association (BFA), has an aggregate area of 160 hectares planted with different fruit-bearing trees. Under the family-based approach, Ms. Padit together with other family members has 20 hectares to be planted with bamboo trees. “We are very thankful for this program as it changed our quality of life. While we remain poor, the difference is that we now have the tools to bring us and our children out of poverty. We only have to really work hard so that the trees we planted will bear fruit and be harvested,” says Mr. Pandit.

Delivering projects where it matters most

The peace and order situation in the countryside has made it difficult for the delivery of services in these conflict areas. Realizing that poverty breeds discontent and social inequality further fan the flame of insurgency, the government has pushed for a whole-of-nation approach to make its presence felt in the most desolate places across the country. The Department has answered the call by identifying some conflict areas and prioritizing them as ENGP sites. Through sheer hard work and steel resolve, employees of the Department immersed themselves in communities identified as hotbeds of insurgency and offered them programs and projects that can be their way out of extreme poverty. It has since been warmly accepted by the masses and families have already formalized their collaboration with the Department, some even receiving initial financial assistance to commence their seedling production activities.

The interior towns of Silvino Lobos, Las Navas, and Catubig in Northern Samar are examples of conflict areas identified by TF-ELCAC in the region and is now a recipient of ENGP. For Northern Samar alone, more than Php74 million has been allotted for family beneficiaries for this year. The same is being replicated in many other conflict areas in Leyte and Samar islands.

The prospect of a better future is within reach. It is just a matter of further strengthening the collaboration of all stakeholders. For the Department to be with the people and offer financial and technical assistance and for the family-beneficiaries through the assistance of their respective POs to embrace the project as their very own. This was emphasized by Jose Elmer Bascos, Assistant Regional Director for Technical Services when he said that, “it is now incumbent upon our beneficiaries to hold the line and ensure that their ENGP sites will be successful. I am confident of a greater chance of success because the families can claim it as their very own – a higher sense of belongingness is an important ingredient of soldiering on, despite the obstacles that may come their way.”

Sustain our gains and protect our forests

While much has been accomplished since the National Greening Program started, a more challenging task is that of maintaining and sustaining it. Believing that the country’s future depends on it, Regional Executive Director Tirso P. Parian, Jr. of DENR in the region, has been egging all partners to maintain the idealism of protecting and conserving the environment and its natural resources. ‘I ask all partners to be our multiplier force on the ground together with our extension officers and personnel of the Department. While we ensure the survival of seedlings we planted, help us to also protect the trees that are still standing in our forests. Protecting it is always better than seizing illegally cut trees. Keep the fire of environmental advocacy burning in our hearts so that our resolve will never waver.” Director Parian says.