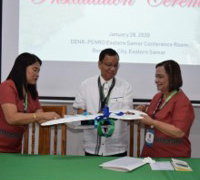 “Under the leadership of these empowered women, I expect that the DENR personnel in Eastern Samar shall be more competent and efficient in the delivery of services to our clientele,” says Regional Executive Director Tirso P. Parian, Jr., of the Department of Environment and Natural Resources in Region VIII.

New officials for PENRO Eastern Samar were recently installed to avoid a vacuum in leadership with the retirement of its former PENR Officer. DENR Regional Special Order No. 2020-20 reassigns Forester Delia A. Benitez as OIC PENRO Eastern Samar. The same RSO reassigns Forester Flordeliz de la Cruz as OIC CENR Officer of CENRO Dolores, which was previously occupied by Benitez.

Noting the commendable performance of Benitez whose leadership of CENRO Dolores resulted in its being adjudged as the 2019 Best CENR Office in the region, RED Parian is optimistic of her new stint as PENR Officer. “With the able leadership of For. Benitez elevated to the provincial level, it is expected to rub-off on the other CENROs and down to the lowest rank. Her wisdom and skills will be imparted to all her subordinates and together, will make DENR in the province of Eastern Samar more relevant in terms of protecting, conserving and rehabilitating the region’s forests and its natural resources,” RED Parian says.